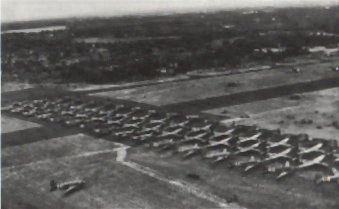 On the end of Aldermaston's main runway Horsas await D-Day in serried ranks with the 434th TCG C-47 tugs lined up on the PSP and grass alongside an evocative June 1944 scene (USAAF via Mrs P.A. Dufeu). 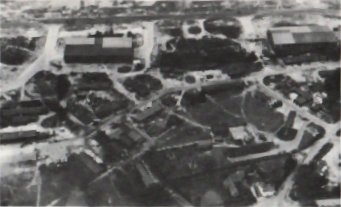 The main technical site at Aldermaston with the Falcon Inn prominent in the bottom right-hand corner of the photo (USAAF via Mrs P.A. Dufeu).

Situated off dispersals on the south side of Aldermaston this MAP hangar was used for Spitfire assembly. Note the Horsas in the background (Vickers Ltd via E.B. Morgan).

Once Aldermaston's gymnasium-cum-church on the communal site, this Maycrete building existed until recently as Tadley Community Centre, surrounded by a modern housing estate (J. Temple).

Originally part of the large Aldermaston Court Estate, the site was chosen in 1941 for development as a bomber OTU with the standard three-runway layout, extensive dispersed enclaves and a large bomb dump. Opened by No 92 Group on July 1 1942, it was never occupied by the intended Wellingtons because it had already been earmarked for the USAAF. As soon as it was habitable, the 60th TCG moved in with four squadrons (10th, 11th, 12th and 28th TCS) of C-47 transports. First used for moving cargo, they were soon paratroop training, making the first American practice jumps over the United Kingdom on September 16 1942. Aldermaston became USAAF Station 467 on October 20 but the decision to open a second front in North Africa meant the transfer of the 60th to the XIIth AF. Crammed with troops, the C-47s left for Portreath and Operation Torch on November 6. The airfield returned briefly to RAF control to await the arrival of the 315th TCG which flew in via the northern Atlantic ferry route on December 12, having been delayed in Greenland by very bad weather. The C-47s/C-53s of the two squadrons (34th and 43rd TCS) were joined in February 1943 by a detachment of No 3 GTS, the only RAF unit to use Aldermaston. Their Master tugs and Hotspur gliders mingled with the Dakotas for nearly a month while Stoke Orchard was out of action. Soon afterwards the Americans received gliders of their own, Waco CG-4A Hadrians arriving unexpectedly during May.

The 315th sent 16 aircraft to Algeria in May to back up forces invading Sicily and they had not returned when the Group was transferred to the IXth AF and went to Welford in November 1943, the IXth Air Support Command HQ moving into Aldermaston Court later that month, taking over the historic home of the Congreve family.

The main technical site was now complete. Four 'T2' hangars and many temporary brick buildings were clustered near the Falcon Inn, while a self-contained MAP site lay south of the airfield off one of the 52 loop dispersals. This site had a large shed, taken over by Vickers in July 1943 for Spitfire assembly, using parts supplied by Reading and Newbury sub-contractors. The aircraft were then flight-tested from Aldermaston, production continuing until the spring of 1945, the site being finally closed on July 20 1946.

The 71st FW HQ moved into Aldermaston briefly and one of its Groups, the 370th, was temporarily based there with sleek twin-boomed P-38 Lightnings during February 1944. Meanwhile behind-the-scenes manoeuvring produced an extraordinary swap whereby the IXth ASC HQ changed places with the XIXth ASC by transferring the name plate but not personnel or equipment, the unit at Aldermaston Court becoming the XIXth on February 1.

Stability came at last when the 434th TCG arrived from Fulbeck on March 3 with its four squadrons (71st, 72nd, 73rd and 74th) of C-47s to continue intensive training with the 101st Airborne. On D-Day they towed 52 Hadrians carrying men and equipment of the 81st Airborne AA Battalion to a LZ a mile inland from Omaha beach. In bright moonlight the aircraft encountered flak over the French coast, losing one combination near Pont l'Abse to accurate ground fire. Forty-nine aircraft reached the LZ and cast off their gliders at 450 ft (137 m) in sight of the green landing T, but only six landed on the planned site, the rest losing it in the turn. The lead glider side-slipped over the trees on to the LZ, but the pilot touched down too fast and hit a bank. Strapped into a jeep in the cabin, the Assistant Divisional Commander, Brigadier General Don Pratt, broke his neck and died instantly. More lifts followed and the Group received a Distinguished Unit Citation and the French Croix de Guerre with Palm for its determination in getting the loads through in the face of heavy losses.

With the bridgehead established, the Group flew cargo in and wounded out while continuing training in preparation for Operation MarkeL On September 17 the 434rd TCG carried elements of the 82nd Airborne Division to Numegen and then flew re-supply despite appalling weather which disrupted operations until the 25th, by which time the venture had failed. More cargo/casualty flights followed before they crossed the Channel to a new base at Mourmelon-le-Grand on February 12 1945.

The IXth AF finally relinquished Aldermaston on June 15. Technical Training Command took over and moved in No 25 (RCAE) Aircrew Holding Unit, which sorted out men for further service in the fight against Japan, or repatriation to Canada. The unit disbanded in December and a C&M party moved in.

The airfield remained dormant until May 9 1946 when BOAC opened its Training HQ at Aldermaston. Dakotas and Oxfords from Whitchurch and Yorks from Ossington were brought in, later joined by Halifax, Halton and Viking aircraft. On January 1 1947 Aldermaston was loaned to the MCA as a temporary civil airport and BEAC joined BOAC to form Airways Training Ltd but, with a financial crisis looming, the school was closed down in November 1948.

Movements which had reached nearly 10,000 a month at the end of 1947 now rapidly dwindled, though reviving briefly when Eagle Aviation was withdrawn from the Berlin Airlift in August 1949 and set up its HQ at Aldermaston. Early in 1950 Eagle was informed that the company must leave by April because the airfield was being relinquished by the MCA.

Most of the communal and instructional buildings to the south of the airfield have been demolished to accommodate a large housing estate at Tadley, including the gymnasium/church. The Gunnery & Crew Procedure Block was used as the village cinema until recently. 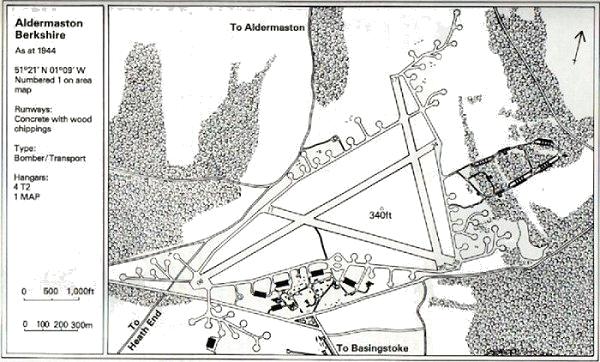