Aircraft designer whose family firm rivalled de Havilland in the 1930s and once built a tourer for Charles Lindbergh. 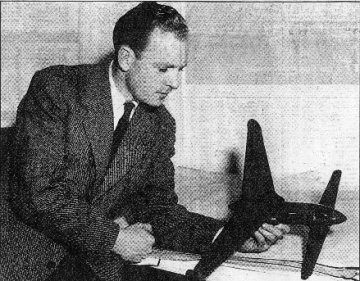 George Miles (1944) with a model of the canard-wing Libellula aeroplane which he later test piloted.

GEORGE MILES, the aircraft designer and test pilot who has died aged 88, was a member of the remarkable Miles aviation family.

George Herbert Miles was born on July 28 1911 at Portslade, on the Sussex coast, where his father owned the Star Model Laundry. It was there, amid the clutter of wicker baskets, that George's elder brother Fred began to build the family's first aeroplane.

By 1929, at nearby Shoreham, Fred Miles had set up the Southern Aircraft Company in order to build a single-seat biplane, the Martlet. After leaving Hove College, George joined him to manage the fast-developing aircraft works, flying school and joyride business.

George Miles was quieter and more reflective than his extrovert brother, but he shared his flair for design. He complemented Fred's drive and impetuosity with a logical and incisive mind.

When the first Martlet was ready, it was bought by Maxine "Blossom" Freeman-Thomas, daughter of the actors Sir Johnston Forbes-Robertson and Gertrude Elliott. Blossom Freeman- Thomas adored her Martlet. She was also rather keen on Fred Miles, who taught her to fly it. In due course, Blossom divorced her husband, heir to the Marquess of Willingdon, and married Miles. She also became a director and designer of the aircraft company.

In the early 1930s, leaving George to mind the shop at Shoreham, Fred and Blossom Miles joined with Charles Powis - a Reading garage owner with aeronautical ambitions - to establish Phillips & Powis Aircraft at Woodley, Berks. In 1933, having identified a market for an affordable light aircraft to compete with de Havilland's Moths, Phillips & Powis produced the Hawk, a wooden, low-wing monoplane which would establish the Mileses' reputation in air races.

As new types of aircraft multiplied, the time came for George to join Fred and Blossom Miles as engine manager and test pilot. Among their new designs was a custom-built Mohawk for Charles Lindbergh, the American aviator, who commissioned this fast, long-range cabin tourer. In seeking to keep a record of their aircraft plans, the Mileses also invented an early photocopier - the "Copy-cat".

As war loomed, the Mileses' designs were much in demand at the Air Ministry. The Hawk became an RAF trainer, and an Elementary Reserve Flying Training School was established at Woodley. The Miles trio also devised an early flight simulator, and in 1938 began to rollout the Miles Master, a two-seater tandem fighter trainer, more complex in design and operation than the Hawk. By September 1940, 500 of these aircraft had been built, and they had played a key role in the training of Hurricane and Spitfire pilots before the Battle of Britain.

The same team also designed the Miles Magister - known as "Maggie" - the RAF's first monoplane trainer and one in which thousands of their pilots learnt to fly.

The family then set up Miles Aircraft, which came to incorporate Phillips & Powis; in 1941 Fred Miles became chairman and managing director. George, then aged 30, was appointed technical director and chief designer.

As chief designer, George Miles held ambitions beyond building the simple trainers which had laid the foundations of the company's success. In some instances, his unorthodox ideas so exasperated the authorities that he felt compelled to conceal new designs from them. One such secret project was the experimental Libellula canard-wing aircraft, which Miles saw as the answer to the problem of operating high performance fighters from aircraft carriers.

When the prototype Libellula was ready for its clandestine maiden flight, the company's chief test pilot refused to fly the strange- looking machine, whose main lifting surface was at the rear. '.Very well," said Miles, "I'll take her up." It proved to be a hair-raising 'and hazardous experience, but despite its instability, the aeroplane's eccentric wing scheme provided many useful insights.

From 1943, George Miles helped his brother with the M.52, an experimental jet aircraft which promised to lead the world in supersonic flight. But in 1946 the government-funded project was abruptly cancelled by Sir Stafford Cripps, Minister of Aircraft Production. Cripps compounded the blow by ordering the Mileses to hand over their designs to the American Bell Aircraft Company. On October 14 1947, Major Chuck Yeager, of the United States air force, made the world's first supersonic flight in a Bell-X1.

As military orders declined, Miles Aircraft sought to replace them with civil ones. George Miles was involved in the designs of the Messenger (one of which was used by Field Marshal Montgomery), Monitor, Gemini, Aerovan and Merchantman aircraft. He also helped with subsidiary activities, such as the contract to market the Biro ballpoint pen outside the United States. But the new ventures were not lucrative enough, and in 1948 the company collapsed.

George Miles moved to Airspeed, and in 1949 became chief designer there. Among the aircraft which he helped to build for them was the Ambassador, known to airline passengers as the British European Airways Elizabethan. Subsequently, Fred Miles reestablished the Miles name in the aircraft business at Redhill, and in 1953 he returned to Shoreham, where George Miles rejoined him.

When, in 1960, Beagle Aircraft was set up to build light aeroplanes, George Miles, by then a Fellow of the Royal Aeronautical Society, became the company's technical director. Three years later he left to establish his own aircraft engineering business.

George Miles married, in 1939, Corinne Mackenzie; they had a daughter.