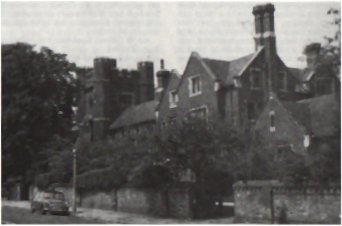 Wantage Hall, Reading - used during the First World War by the School of Aeronautics (J. Temple).

During 1915 it was realised that the war was not going to be over quickly and that many more RFC squadrons would be required, bringing the War Office face to face with the need for an enlargement of the training organisation. Before more training schools could be formed, however, instructors were needed and during December 1915 the buildings of University College, Reading, were taken over and the School of Instruction established.

It soon became, together with a similar school at Oxford, the initial training course for prospective pilots and observers and was renamed No 1 School of Military Aeronautics on October 27 1916. Yeomanry House, Castle Hill (now used by the Council and by Reading Museum) was the original HQ, the main classrooms were in Wantage Hall (SU727724), and accommodation was requisitioned in various parts of the town. By 1917 cadets were doing a four week course in artillery spotting, use of wireless, photography and machine gun instruction, practical training being provided by lodging old aircraft fuselages in trees lining Upper Redlands Road near Wantage Hall. This startling sight was only matched by the activities on playing fields alongside Elmhurst Road (SU731723), where wingless aircraft were used to provide taxying experience. It is probable that this instruction was combined with that given to trainees of the School of Technical Training (Men), which was also established at Reading. Advanced instruction for the latter took place at a small aerodrome built on low-lying ground near the River Kennet at Coley, by joining up two fields alongside the CWS jam factory off Beverley Avenue. It is believed that the main aircraft in use was the Avro 504, but Martinsyde S1 biplanes and various Farman Longhorns and Shorthorns were also reported at Reading.

The field also served as a LG for visitors to both training organisations until September 1917, when the S oTT (Men) started its move to Halton. Coley Park remained open, for it is recorded that Captain Palethorpe, an RAE test pilot, forcelanded there on November 23 1918 during a flight from Farnborough in the temperamental BAT Bantam.

The aerodrome, plagued by river fogs, fell into disuse after the war and the land was released. All trace of it and the jam factory have long disappeared. It is now the site of an industrial estate.