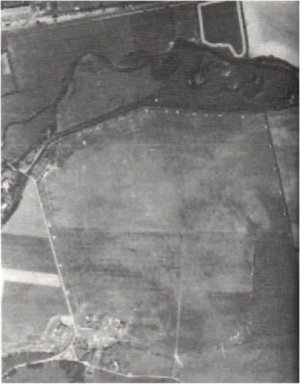 Vertical of Theale taken by No 541 Squadron on July JO 1946. The technical site is in the bottom left-hand corner of the field (DoE/Crown Copyright).

Most airfields built during World War 2 have changed considerably since 1945, some are difficult to positively locate, but few have actually disappeared. Theale is one of the latter, most of it having been removed for gravel extraction, leaving a large expanse of water covering the area.

Bounded by the Kennet & Avon Canal to the north and minor roads to the west and south, this rough square of grass fields was requisitioned in 1940 for use by No 8 EFTS Woodley as Sheffield Farm RLG. Expected in service during November, the newly sown grass was not ready until the following spring when a new unit was planned, operated by Phillip & Powis Aircraft Ltd under contract, as a C Type EFTS. No 26 EFTS was formed on July 21 1941 with an establishment of 24 Tiger Moths and 60 pupils, the latter split into two six week ab initio courses, overlapping by three weeks.

The airfield opened on August 14 and was renamed Theale the following day. Delayed by flooding it was still far from complete. Two Blister hangars were ready together with some of the office, store and crew huts, but the airmens' mess was still under construction and there was no water supply to the site. Most of the instructors were transferred from No 8 EFTS and all maintenance and other ground services were civilianised, under the overall control of No 50 Group. Sulhamstead House, about a mile from the airfield, was taken over to accommodate pupils and provide ground school lecture rooms, but it was not quite ready and the first course had to be delayed for six days.

Conditions on the airfield were still primitive but the first course commenced flying on August 21. With two Nissen huts as accommodation, B Flight started flying from a dispersed site in October 1941, and slowly the technical area near the village of Sheffield Bottom was completed around a 'T1' hangar. By July 1941 the hangarage consisted of the 'T1', two Over-Blisters and three Double Standard Blisters. Flooding was a constant threat, pumping being required in winter.

Tiger Moths remained the main equipment, with one or two Puss Moths, Hinds or Mentors on strength as communications aircraft. There were no night flying facilities, this being carried out at White Waltham, but there was a watch office, of a rare 1941 type. Accidents are inevitable at an EFTS, but seem to have been few at Theale, one of the worst being a collision on the approach on May 19 1942. The school changed over to grading in 1943, each pupil receiving about 12 hours dual flying, but this ceased in May 1944 and was superseded by assessment courses for would-be flying instructors, quickly marred by a nasty accident when DE 261 crashed amongst Nissen hut sleeping quarters.

No 128 Gliding School formed during 1944, for ATC training using Slingsby Cadets and one of the Blister hangars, it remaining in operation after the end of the war in Europe when Theale became the first EFTS to close down. Flying ceased on June 30 1945, Sulhampstead House was vacated on July 7 and two days later No 26 EFTS was disbanded, leaving Theale to the C&M party and with 28 Tiger Moths awaiting disposal instructions. An Aircrew Disposal Unit used some of the accommodation until December 14 1945 and the airfield was host to No 128 GS until 1948.

The gravel companies moved in when the site was de-requisitioned and now only only two areas of the airfield remain, the north-west corner on which stands a wooden house, and the south-west where part of the main technical site still stands. This includes a Nissen, two other huts, and the 'Tl' hangar which is used to accommodate vehicles used on the adjacent residual gravel workings. The flooded pits, appropriate in view of the waterlogging experienced throughout its airfield use, are now used as a marine leisure centre for sailing and water skiing.

The T1 Hangar and the remains of the technical site southwest of the airfield, along with the wooden bungalow were demolished six or seven years ago. Gravel extraction ceased nearly two years ago but some landfill continues. Where the T1 hangar and technical site stood is now a `business park'. The lake that resulted from the gravel extraction is now a sailing club (Theale Sailing Club). oposite the business park are some houses and a licenced pub/restaurant (Fox and Hounds), this may have been a local pub during the
war? The canal that bordered the airfield to the north was a prospective line of defence upon invasion and several gun emplacements and bunkers still survive allong there. The canal and its locks have enjoyed much restoration and refurbishment during the past two decades as the leasure industry arose  in the aftermath of post war depression.