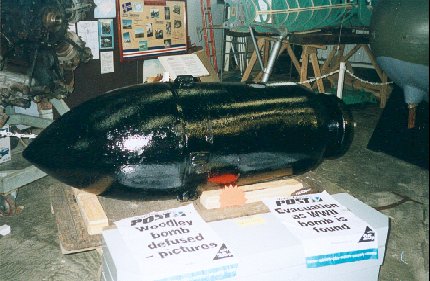 Transcript of an interview given by Mr. Noel Chappell regarding the unexploded 1000 kg bomb unearthed in October 1999. Interviewed by Jean Fostekew.

In 1941 I lived in Duffield Road, Woodley, next door to Bill Skinner, Miles Chief Test Pilot; his son, Tony who was then about 8 years old was in the garden with me, I was then 13.

It was a day early in November 1941, a typical November day, a heavily overcast day with a low cloud base. We heard the drone of aircraft engines. We heard a whirling and whistling sound and the sound of an aircraft. A stick of bombs came down through the clouds, there were four of them, definitely four, I am absolutely certain of that. There was a dull thud and big heaps of earth and clay flew into the air. This was about 400 - 500 yards away from where we were standing. Two bombs exploded and there were two craters. We ran round the garden and into the house where my mother was. When my father came home he said "that was pretty close" and I told my father that there were four bombs and evidently it was investigated but there was no sign of the other two. He said that I must have been mistaken but I knew what I saw. I was 13, very nearly 14. If you can get hold of Tony Skinner he might be able to remember the incident [ unfortunately he died within the last 2 years - Ed. ]

In 1958 I bought the land and had a house built here in Sandford Drive [ this is nowhere near Sandford Lane but is a turning off Duffield Road - Ed. ]

The land where the bombs fell was then farmland between the end of the gardens in Butts Hill Road (which were very long gardens) and Duffield Road, which also had long gardens. Some of it was fenced off and was owned by a Mr Middleman, he kept animals on it. It was subsequently sold for gravel extraction to a gravel company which I think was the Ham River Gravel Co. and extraction was started.

Then one summer evening in the late 1960's or it may have been the early 1970's a policeman came to our door and said that we had to be evacuated because an unexploded bomb had been found on the land where I saw them fall, I told them then that there was yet another one to be found and sure, enough, the story was repeated in October 1999 when, once again we had to be evacuated for the bomb to be defused and made safe.

I knew when I saw this bomb, that I was looking at it for the second time because I felt that it would just be too much of a coincidence for an entirely different German aircraft to have dropped another bomb in exactly the same place where I saw the four of them drop in November 1941.

Questioning Mr .Chappell about his background he said :-

I went to the Collegiate School in Reading but, not being very academic I left school at fourteen and started as an Apprentice in January 1942 (my birthday being 24th December) at the Miles Apprentice School, after one year I was transferred to the electrical apprenticeship. I joined the ATC .When I was 17 I volunteered for the RAF and when I was 18 I was called up. There was a problem that I should have been deferred because of my occupation, however I did go into the RAF and was sent to Padgate, thence to Wiltshire and Yatesbury. Although I applied for aircrew I did not get accepted for that and spent some time as a physical training instructor.

When I left the RAF the Miles Company was breaking up but nevertheless there was a War Act that returning servicemen had to be employed or reinstated in their previous jobs and so I went back to work at the factory at Woodley where I remained and retired in 1992 having, including RAF service, completed 50 years employment.

Lewis Budd was an instructor at the Apprentice School and later at Miles Aeronautical Technical School, he drove a car full of bullet holes which he outlined with red oxide to prevent further corrosion (or maybe to emphasise his narrow escape) which happened like this; He said that he was driving down Headley Road, it was a Sunday morning, when he saw and heard a German aircraft machine-gunning the road and airfield ahead of him, so he leapt out of his car and hid in a ditch getting back in his car to find it full of bullet holes. He did not have them repaired because evidently he got a lot of free beers bought for him by leaving his car outside the pub and telling the story in the bar.

This was possibly the same time that the bombs were dropped in the allotments opposite the training school and the old cottages in Headley Road were blown up. One of them belonged to Mr. Lee who had the off licence and bakery in Headley Road, these cottages were so old and decrepit that they might just have fallen down from the blast even if they did not receive a direct hit.

The bombs that dropped actually on the airfield in early 40 -41 [actually September 1940 - Ed. ] these were dropped by a Junkers 88, I was familiar with all types of German aircraft, in fact I knew all about aircraft, we all did. We went in the air-raid shelter (that my father had built) during this raid, the sirens having already been sounded, and when my mother and I were running up the garden to the air-raid shelter I clearly saw the Junkers.

Junkers 88 .Twin engined bomber. 2 bomb carriers under each inner wing, suitable for bombs up to 1,000 kg. These can be used for fuel tanks. Ten normal bomb carriers each capable of taking a 50 kg. Maximum bomb load ?