In 1942 the Air Ministry and the Ministry of Aviation approached Miles Aircraft with a top-secret contract for a turbojet research plane designed to reach supersonic speeds. The Miles M.52 was designed for a speed of 1000mph at 36,000 feet to be reached in 1.5 minutes. 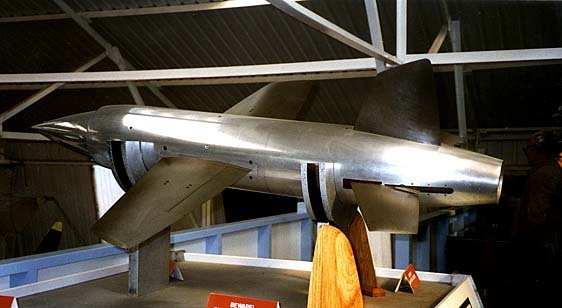 A model of the M.52 on display at the museum

New ground was being broken in all areas of technology and design. The wings were very thin and designed to lie within the Vee-shaped shock wave created by the aircraft nose at supersonic speeds.

The fuselage had a separate cone shaped nose section housing the crew of one. In the event of an emergency, this pressurised pod was to have been separated from the remainder of the fuselage by using explosive bolts. The pilot was to have made his final exit by parachute.

Engine development went to the Whittle company utilising the W2/700 with after burning - later known as the Rolls Royce Derwent. Further power was to have been obtained by fitting a specially ducted fan to increase the airflow through the jet system.

However, at the end of the war, the Director of Scientific Research, Sir Ben Lockspeiser, cancelled the project "......in view of the unknown hazards near the speed of sound ....... considered unwise to proceed with the full scale experiments." In reality, despite 90% of the design work completed and with 50% of the construction finished, the project fell to a Treasury savings measure.

All design data was sent to BELL in the USA and in 1947 the sound barrier was broken in the BELL M.52 look alike, the XS-1. Also, the Rolls Royce Derwent engine appeared in the USA as the General Electric Type 1!

Following the cancellation of the M.52, the Government instituted a new programme involving "no danger to test pilots and economy in purpose." This was another way of saying that it was planned to use expendable, pilotless, rocket-propelled missiles. The Royal Aircraft Establishment was responsible for the development of a suitable rocket motor and in charge of aircraft design was Barnes Wallis from Vickers Armstrong - the father of the "bouncing bomb" and the 12,000lb "Tallboy" earthquake bomb.

A light bomber took off from RAF St. Eval in Cornwall with a rocket strapped to its belly but the motor exploded shortly after launch. Following this, and the success of the XS-1 the Daily Express took up the cause for the restoration of the M.52 programme, but to no effect.

In October 1948 a second rocket was launched. This was successful and a speed of Mach 1.5 was obtained. But, instead of diving into the sea as planned, the model ignored radio commands and was last observed (on radar) heading out into the Atlantic.

The final touch of irony came when even these rocket trials were suspended, the reason being, "the high cost for little return". The total dividend from this investment was the information that a small scale model of the Miles M.52 had successfully broken the sound barrier. But, the United Kingdom had already lost the chance of being the first nation to achieve piloted supersonic flight.