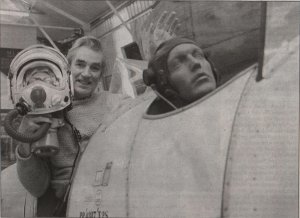 An enquiry by American space agency NASA about helmets used in the film 2001: A Space Odyssey, has led to an old Maidenhead company.

Based at White Waltham airfield, ML Aviation (MLA) employed an estimated 150 people and was at the cutting edge of development in the aviation industry.

Much of the work was classified top secret and was for the Ministry of Defense. It included the development of ejector seats, black boxes, a flying jeep, a remote controlled flying surveillance unit and various pressurised helmets.

To its credit one of its helmet designs was borrowed by director Stanley Kubrick for his classic science fiction film.

Now it seems, after 30 years, the helmets borrowed for use in 2001: A Space Odyssey could be used as inspiration for new equivalent for use on NASA missions to the Moon, and even Mars.

The interest from NASA came to light when a Maidenhead businessmen received an e-mail from one of the space agency's scientists, Robert Yowell. Mr Yowell's remit is to develop equipment for astronauts to wear when they leave their craft to 'space walk', as he was interested in tracking down a Maidenhead company he believed had designed the helmets from the film.

As he said he understood the company to be called MV Aviation, but after an article appeared last week in the Advertiser about his search, readers came forward with the name ML Aviation, and ex-staff from the company were tracked down to reveal some of their interesting work.

Pamela Gregory, wife of John Gregory who oversaw much of the design of the helmets and developed the initial ideas, said she well remembered her husband meeting the famous director.

Mrs Gregory said: "He talked to Kubrick. He was asked to go along there because he designed the thing."

She added: "He went to the studio. He was there on several occasions and as a matter of fact he didn't get on with Kubrick. "

Mrs Gregory said her husband wasn't that keen on the involvement with the film.

Mr Gregory died in February last year at the age of 73.

He studied at aeronautical college before serving time in the Fleet Air Arm. On his return to England he joined MLA and stayed for the whole of his career.

Maurice Roberts, who now lives in Charvill, near Reading, was a metal machiner for the company at White Waltham.

Mr Roberts said the place was a hotbed of ideas, packed full of talented engineers and designers.

He described the pressurised helmets the company made as literally "holding the pilot's brains in" when they reached high altitude during flight.

Designers bounced ideas back and forth at the innovative company and were able to observe all stages of development from their first primitive drawings through to the testing of the finished product.

Mr Roberts said: "Designer used to come to me with an idea on a fag packet and I used to build the first prototype."

Jack Austin, who works at MLA for 34 years, and helped develop the helmets along side Mr Gregory, also agreed it was an incredible place to work.

Mr Austin said: "It was a very interesting. Sometimes you wouldn't sleep all night because some idea had come to you."

He said one of the real brains behind the company was designer Marcel Lobelle.

Dick, who works at the Museum of Berkshire Aviation in Mohawk Way, Woodley, confirmed Mr Lobelle's importance to MLA.

Be said although the origins of the company could be traced back to Wrightson Aircraft Sales, which changed its name to Malcolm and Farquharson and then R Malcolm company in the 1930s; it wasn't until October 1946 that MLA was born.

Dick said: "It grew and grew. The company started with the sacking of Lobelle from Fairey's. He was a strong character but one of those people who completely dominated, so he was a feared character.

"But he was an outstanding engineer and the company really started around him."

Dick himself worked for nearly 40 years in the design offices at the White Waltham based company.

The developed mainly loading carriages for holding missiles:, used on planes such as the Buccaneer, Jaguar and Harriers and later worked on the Euro-Fighter aircraft.

Back in 1961/62 MLA who was responsible for developing and building the pressurised helmets used in the testing of a new supersonic jet, later simply called Concorde, and custom made the helmets for the test pilots, one of which is at the Woodley Museum.

The helmets had two visors, were heated, supplied oxygen to the wearer, boasted radio contact, and were able to protect the pilot in the event of pressure being lost in the cabin while in flight.

Dick had has put together an exhibition to preserve and celebrate the memory of ML Aviation at the impressive museum.

Sadly the exhibition also recalls the recent demise of the name of ML Aviation., following the company's takeover in late 1997, when the Cobham Engineering Group acquired MLA and several other subsidiaries, merging with Flight Refuelling in Wimborne, Dorset.

Dick explains in the end it was the success of MLA, in particular in acquiring a large contract for work on the Euro-Fighter weapons carriage, that spelled its end.

He said winning the contract had made the company 'plumb ripe for picking' and so in early 1998, when the Cobham Engineering Group moved from its base in Andover, the name MLA was finally dropped. The firm left Waltham in early 1991 and its main buildings were demolished in 1996.

Article and photographs by kind permission of Maidenhead Advertiser, February 26, 1999